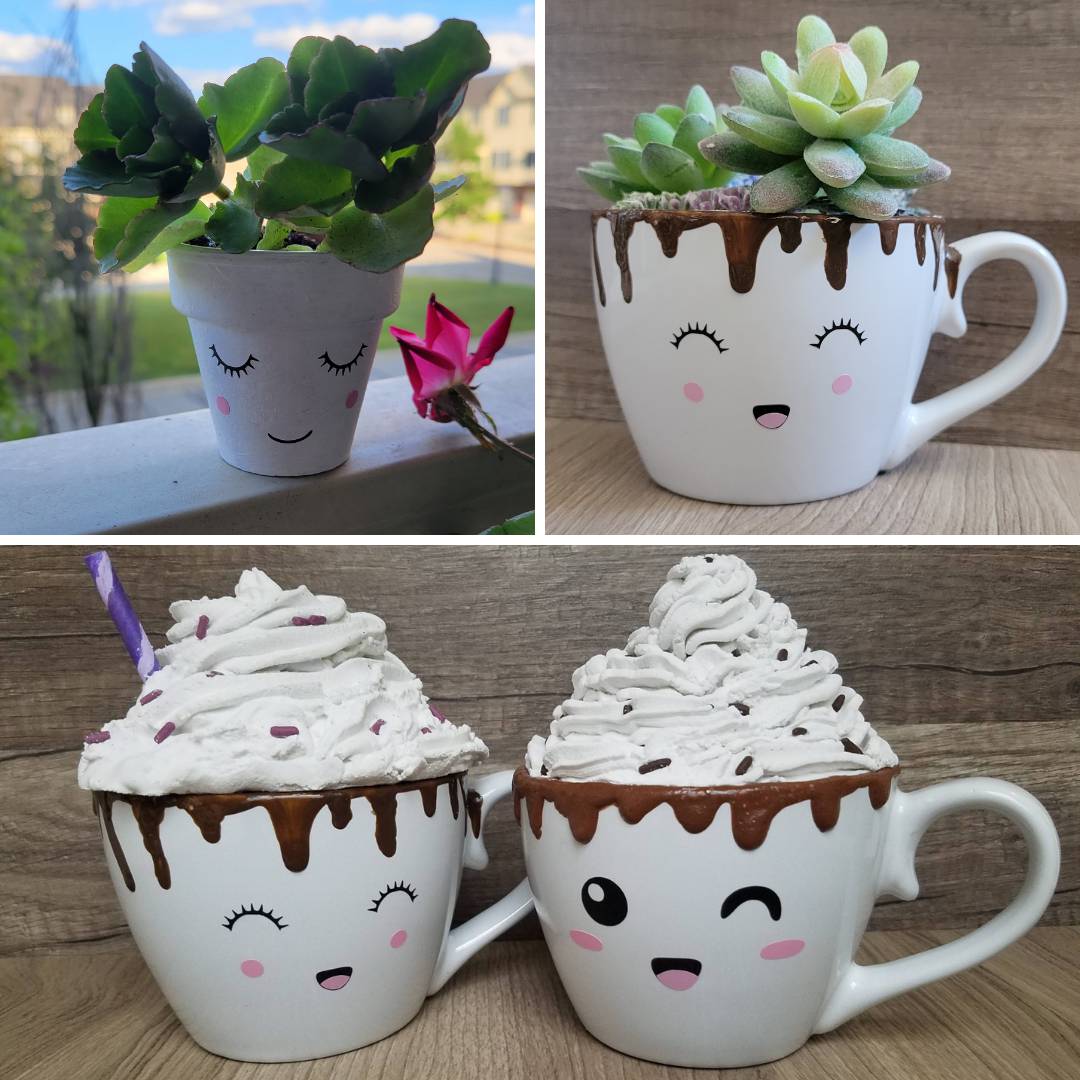 Most of the supplies in this project can be purchased from Dollar Tree or for about $1.

I started off by painting my paper straw.  I wanted my mug to be a piece I could keep up all year around or at least longer than just the Christmas season.  My favorite color is purple.  So, I decided to make my mug a purple theme.  I started off by cutting my straw down to size.  I did not measure this.  You do not need a very big piece.  I then painted the entire straw purple with my acrylic paint.  Once that had dried, I carefully made a lighter purple stripe around the straw, following the seam of the straw.  I then set this aside to dry. My boyfriend loves chocolate and decided to go with a chocolate theme for his cup.  He also decided not to put a straw in his piece.

The next thing we worked on was the sprinkles.  We made ours out of clay.  I started out by mixing red and blue clay together and even a little white, to get a shade of purple I was happy with.  Then I rolled it out very then and cut small pieces off with a plastic knife.  I then rounded the edges of each sprinkle with my fingers.

Next, we worked on our chocolate drips around the top of our cup.  We both did two different techniques with this.  We both started off by mixing a little acrylic paint with mod podge.  You just need enough paint to color the mod podge.  The mod podge will thicken your paint and make it thicker, so it does not just run all the way down your cup.  If your mixture is very runny, then you may want to let it sit for a little bit to thicken up/allow the mod podge to start to dry.  I added a darker brown to my mod podge.  I mixed my mod podge and acrylic paint in a small paper cup.  I did not want to ruin any of my good paint brushes with the mod podge.  So, I used my plastic makeup brush I got from Dollar Tree.  I started off by painting the rim of my coffee cup with the mixture and allowed it to drip on its own.  The mixture actually did not drip much.  This may have been due to my mod podge being kind of old.  So, after the rim was covered, I started to apply thicker amounts of the mod podge and acrylic paint mixture in areas I wanted drips of chocolate to come down.  I needed to paint some drips on as well.  I took a more random approach to my technique.  The only tip is to be careful when rotating your cup.  As some of my drips were rolling down my cup, I rotated my cup to work on another side, and thus my drips started to roll at more of an angle, rather than just straight down.  My boyfriend used an old paint brush for his.  The paint brush seemed to create some bubbles in the mixture when it was stirred.  My boyfriend started at the bottom of where he wanted his drips to be and moved his paint brush up to the rim of his cup.  He also applied his mixture on very thick.  His is the lighter brown color.  He also did a more uniform style to his drips, not as random as mine.

If you do not want to mess with the dripping paint technique, then you could purchase my face design here in my shop.  It also contains SVGs of the dripping chocolate.  You could then cut the dripping chocolate out of vinyl and apply it to the rim of your coffee cup.  If you choose to do this method, then I suggest applying the dripping chocolate in sections, and not in one long strip.  This will allow you to apply it easier and smoother.  You will also need to size the pieces according to your cup size and your liking.

Now for the whip cream on top.  I started off by flipping my cup over and tracing a circle around the rim.  I then cut this circle out with scissors.  I wanted my whip cream to sit on top of my cup so it will be easier to remove.  I am going to use the straw I made as a handle to remove my whip cream from my cup to reveal some snacks and candies inside.  This will be a small snack stash for myself when I am working.  I like that it will be out of sight so I am not constantly seeing the snacks and thus more tempted to eat them.  My boyfriend trimmed his cardboard circle a bit smaller than his rim so that his whip cream will sit a bit more inside his cup.  We both took a scrap piece of paper and shaped it into a ball.  We then hot glued it to the center of our cardboard circles.  This will provide some support for our whip cream as well as allow us to not need as much spackle.

Place your piping tip inside your piping bag, a plastic bag will work as well, then cut a small hole so that just the tip of the pipping tip can stick through.  I mixed a small amount of white acrylic paint to the light weight spackle container and used my plastic knife to mix it together in the container it came in.  I also found that adding a little water, and mixing it well, will also help.  Then scoop your spackle into your piping bag. Then push all the spackle down to the tip of the piping bag, and twist off the top, otherwise when you squeeze your bag the spackle will just come out the top.  I also found it is easier to put your piping bag inside a cup or container to help hold it as you put the spackle in the bag.

I tried piping my whip cream a few times.  The first time I tried this dotting affect, which I decided I did not like as well.  The nice thing is if you do not like how your whip cream turns out, you can simply scoop it back into the piping bag and start over.  I then decided to try a more circular pattern, which is the one I stuck with.  I tried making my whip cream a few times, before finally saying it was good enough.  The back is a bit rough and I added a bit too much water to it, which I could not unadd, but all and all it is not bad for my first attempt.  My boyfriend and I definitely learned a bit along the way.  I may attempt to make another whip cream top in the future, but for now it is good.  That is the nice thing about my style of top, I can switch it out and make new ones if I wish.  I could even make different sprinkles and decorations for different holidays and seasons.

Once you are happy with the look of your whip cream you will need to add your sprinkles, straw, and other decorations before it dries.  Then allow it to dry for at least 24 hours or more.  Depending on how thick you made your whip cream and how much paint and or water you added to your spackle it may take longer to dry.  Acrylic paint contains some water, so be careful not to add to much paint to your spackle. I added a little to much water to my spackle mixture. As a result my whip cream is more wide than tall, and some of the whip cream lost its shape at the bottom. My boyfriend could have added just a little more water to his mixture since his was very thick and hard to squeeze out of the bag.

The last step is to cut out your face and apply it to your cup, then put the whip cream on top.  We made our faces about 2.5 inches wide, but your measurements may differ depending on the size of your mug. I left my cardboard attached to my dried spackle/whip cream.  With my design you can remove the whip cream. I stashed a few candies inside my mug. I like to snack while I work, but if I just had a bowl out, then I would eat all of it. So, this way they are close, but out of sight.

I love how these turned out. My boyfriend said these are probably his favorite crafts I have made thus far. Maybe that is because he made one with me. I can not wait to see how yours turned out!

Knowing Which Cricut Blade To Use For Which Projects.