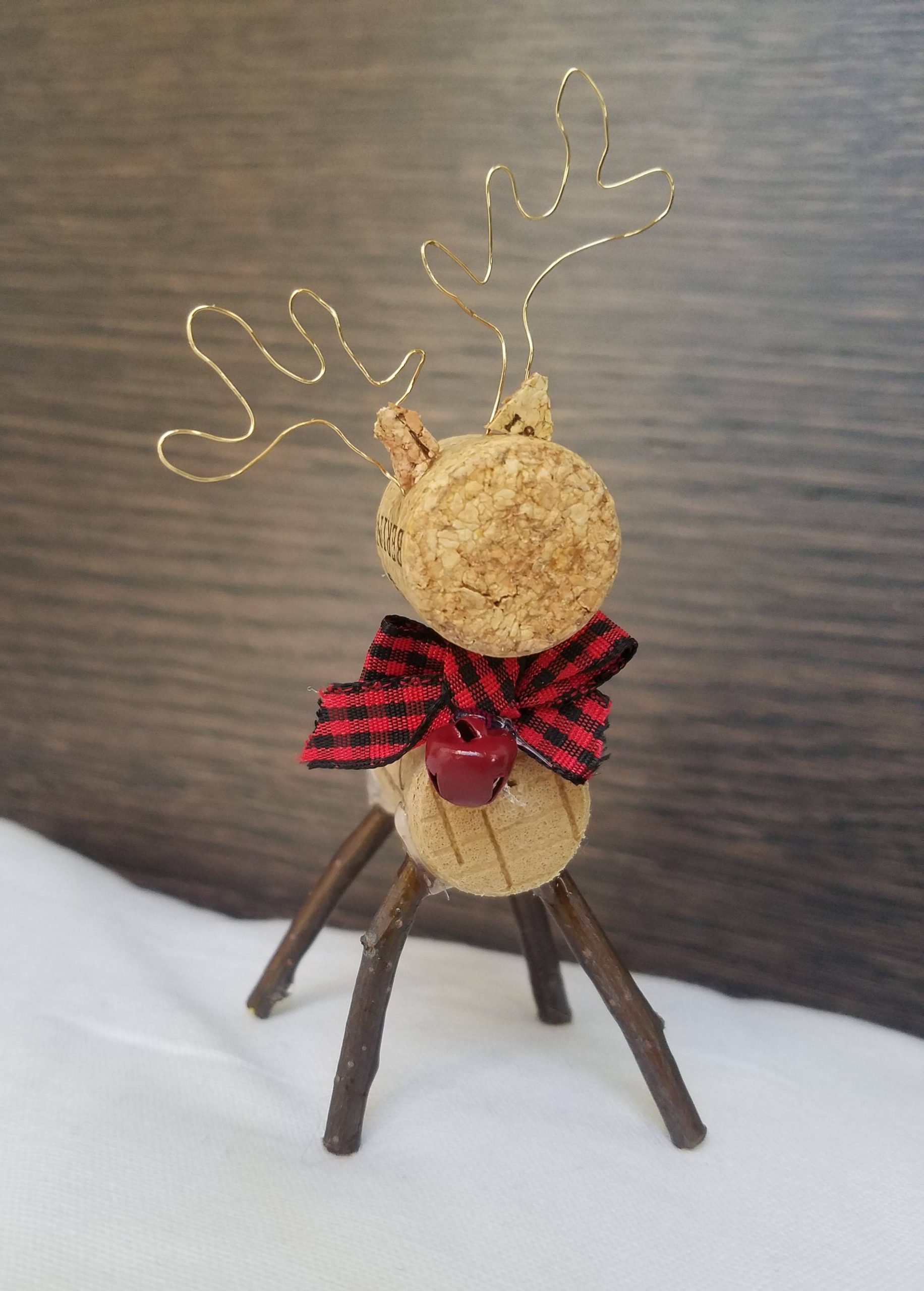 I started out by deciding what I wanted each part of the reindeer to be made out of.  There are several different possibilities for many parts of the reindeer.  I chose to make a tail and ears out of the left-over cork I cut for the head.  You could also make the tail and ears out of felt or cardstock, just to name a few other options.  I then decided to make the antlers out of a thin wire I had.  For the legs my wire would not be strong enough to hold my reindeer, so I decided to use some sticks.  I liked the darker brown color for the legs.  It gave a nice contrast from the body. I wanted the neck to match the color of the wine corks, so for this I used a small piece of dowel rod I cut down to size.  Feel free to make it your own and use what you have on hand already.

For the antlers I started out by making a design in a peg board and tried wrapping the wire around the pegs.  This was not going as well as I expected, so I scrapped that and just bent the wires with my hands.  Surprisingly it was much easier to just bend the wire with my hands.  My antlers are not perfect and do not perfectly match each other, but that gives it character.  Besides real antlers do not perfectly match each other. To attach the antlers, I made a small pre hole into the wine cork with a pointy tool I had.  I then pushed the wires into the holes I made.  I added some gorilla glue to ensure the wires would not come out later.

The dowel rod piece I used for the neck was pointy on one end.  So, I made a pre hole in the bottom of the reindeer’s head and stuck this pointy end in that hole.  The other end of the dowel rod I just glued to the base of the reindeer, because it was not pointy and would need a much bigger hole to fit in.  So, for me applying some gorilla glue and hot glue and placing glue bottles around it to help hold it in place till the glue dried was a much easier method.  The gorilla glue helped hold it longer, and the hot glue is a short-term hold until the gorilla glue dries.

Next, I cut sections out of the extra wine cork I had from when I cut the head in half.  These pieces were used to make the tail and ears of my reindeer.  These were then glued in place with the gorilla glue.

For the legs I first tried placing my sticks on some clay to hold them in place.  I then tried to rest the reindeer body on top of the legs.  The legs kept falling over though.  Maybe if I used a bit more clay it would have worked better.  I decided to just use the hot glue to help hold things in place will my gorilla glue was dry.  I did not want to do this at first because you would see some of the glue, but it was just easier and my other idea was not working.  When you glue your legs, you will want to put them at a slight angle, otherwise your reindeer may not be able to stand up on his or her own.  I held my leg in place and lined up the body over it to ensure the angle was to my liking and sturdy.  I then placed the hot glue.  I attempted to cut a small hole into my cork with the exacto knife to help hold the legs, but they were too thick.  After I glued all my legs into place, I thought about rotating my exacto knife into the cork to make a nice circular hole into the cork.  I tested this on my scrap piece of cork and it worked great.  So, for next time I would do this method, then just apply the gorilla glue so no glue would show.