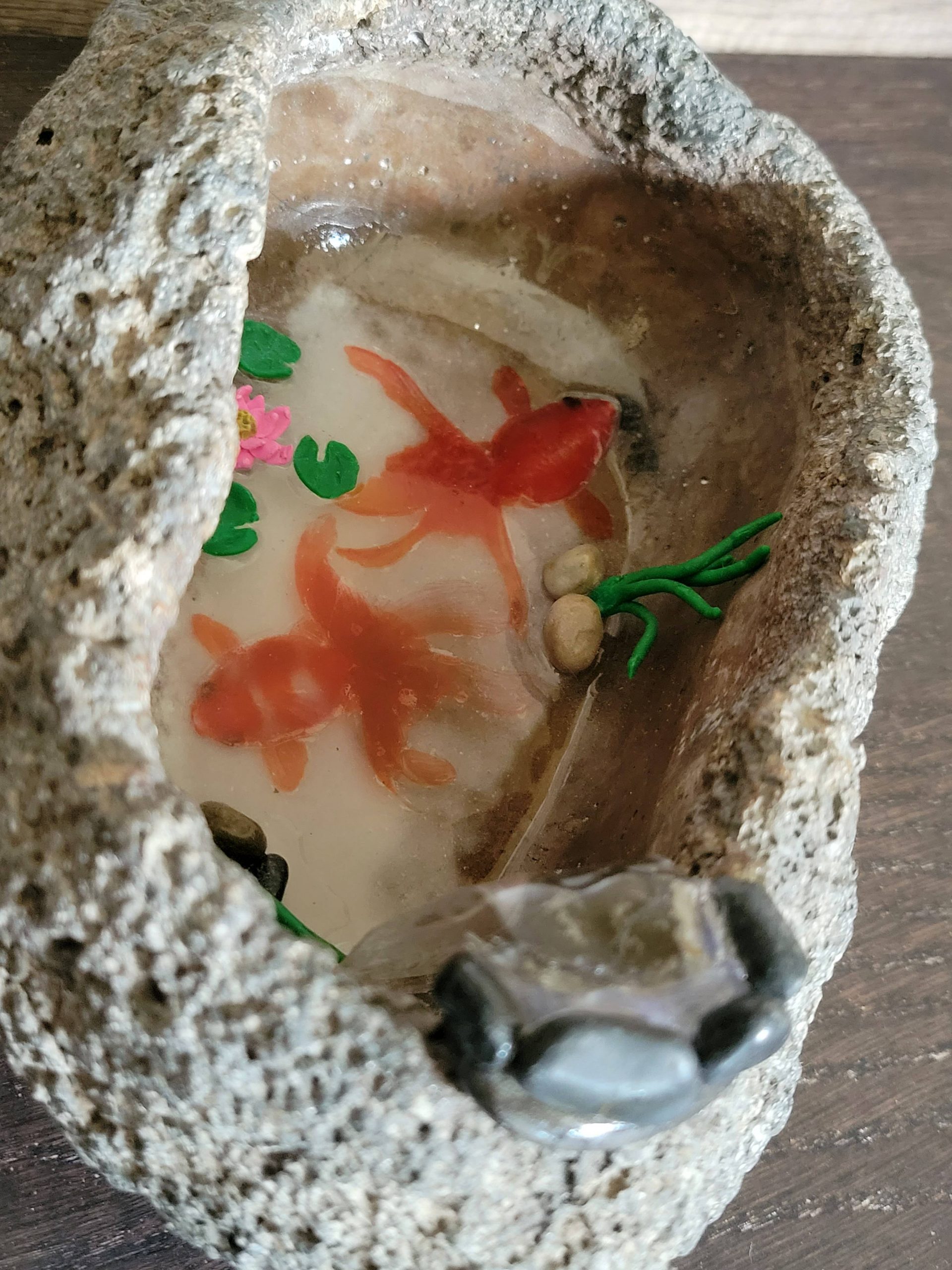 When I started working on this project it was a nice sunny day, but as the day went on it became cloudy and even rained towards the end of the day.  The clouds made my UV resin take a long time to cure.  It still cured faster than two-part resin cures tough.  With the clouds I had to leave my piece outside for about an hour or two between each layer to allow the UV resin to cure/harden.  It would have been much faster if I bought a UV light.  With a UV light the resin would cure in a matter of minutes.  I also risked the chance of a bug or leaf from outside falling in my resin before it was fully cured.  This was my first time working with UV resin.  That is why I waited on buying the UV light.

I used polymer clay to make my greenery and flower.  For the lily pads I made roundish circles.  I then used a tooth pick to cut out a small section of the lily pad.  I also used that tooth pick to make a few lines in the lily pad.  Lastly, I rolled the edges of the lily pad a little with my fingers.  I made three lily pads in total.  For the other greenery I rolled out several pieces in my hands at different lengths.  I then put these pieces together and smoothed the bottom of them together to combine them.  I let them bend naturally, and helped a few bend more where needed.  I laid these two pieces flat on my cookie sheet when baking them.  For the flower I made 4 different layers.  I made little petals, then blended the petals together on the back to form each layer.  The bottom and second layer are about the same.  I then layered them on top of each other so the petals fell in-between each other.  For the third layer of the flower, I only attached 4 petals together.  For the last layer I put a small piece of yellow I the center of the flower, and used my tooth pick to poke some holes to give it some more detail.  Polymer clay needs to be bakes in an oven to harden.  I place my polymer clay on a cookie sheet covered in parchment paper at 275 F.  Depending on how thick your pieces are will determine how long to leave them in the oven for.  Since my pieces were relatively small and thin, they only needed about 10 to 15 minutes.  Just keep an eye on your pieces.  Do NOT turn the oven temperature higher in hopes to bake your pieces faster.  This will just burn your pieces.

I started out by applying a small layer of resin in the base of my container.  I thought it would be nice to have some sand at the bottom of my koi fish pond.  I thought it might make the fish show up better.  So, I mixed some sand with my resin, then poured it into my container.  This just made the bottom layer look a bit cloudy.  Also, I realize koi fish ponds do not have sand at the bottom because they are fresh water.  So, I do not recommend adding the sand to yours.  It does not look very nice and most koi fish ponds do not have sand in them.

Once this bottom layer was cured/hardened, I placed my first layer fish.  I was like placing a sticker or window cling down.  I only laid one fish down in this layer.  I wanted the second fish to start on the next layer so it seemed to be slightly higher in the water than the first one.  I then covered the fish with a thin layer of resin, and let it cure.  Next, I laid the next layer of the fish down, followed by a thin layer of resin, and let it cure.  I continued to do this until all the fish layers were down and covered in resin.  Before doing the very top layer I added my clay greenery, flower, and a few small rocks, then allowed that layer to cure, which held these pieces in place.  The resin acts like a glue.

Next, I created the waterfall.  I used a strip of clear flimsy plastic I found, and cut if down to the thickness and length I wanted.  You could also use two strips of clear scotch tape and put the two sticky sides together.  You do not want an exposed sticky side, because then dust and everything will stick to it over time.  You could use one piece of tape and cover the sticky side with the resin as well.  I used some small rocks to create the top of my water fall.  I started out by placing a larger flat rock where I wanted my waterfall to be.  I then applied some hot glue to attach it to my container.  I then used hot glue to glue smaller rocks around the outside edges of this bigger flat rock.  This created a nice shape for my waterfall.  If you have a UV light, then you could use your UV resin instead of the hot glue.  By this time, it was about to downpour rain outside, so there was not much sun to cure my UV resin.  So, I used the hot glue to speed things up, as well as to create a boarder to keep my resin from dripping down the outside of my container while it cured.  I then placed my clear plastic in place and poured some UV resin over it both at the top and down the strip of plastic.  I was able to get a few drips of resin to cure as it was going down the clear tape, which makes the waterfall look more realistic.  I also added a little resin to the greenery by the waterfall to make it look wet.

I was afraid I would run out of my resin so I was a bit skimpy when filling my koi fish pond.  I wish I filled it up a bit more, because the water level (resin) looks a little low.  I also wish I did not add the sand to the first layer.  Those are the only two things I would change about this piece.  I am really happy with how it turned out.  The pictures do not do this piece justice.  Maybe a lighter colored container would show the details and 3D look of the fish better. They fish really do look like they are 3D, and very real looking.

How To Make A Floating Tensegrity Table