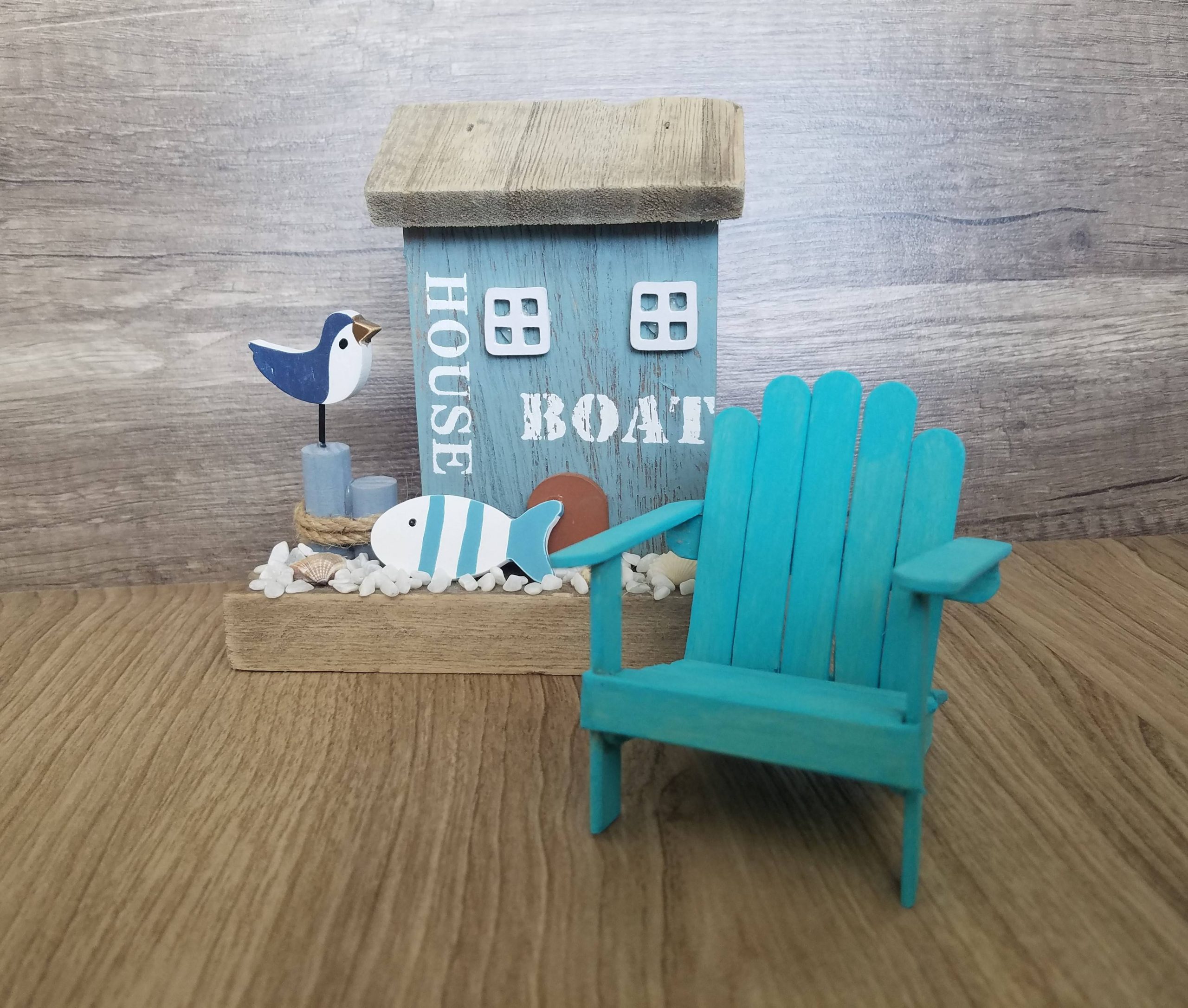 I do not have many pictures of me making this project, because it was very difficult to try and hold things together and take pictures at the same time.  I definitely needed another set of hands.  I also did not want to wait for everything to fully dry before moving onto the next step, which made things a lot harder.  Twice pieces came apart, because they were not fully dry before I moved on.  So, I became very caught up in the project and forgot about taking pictures for you.

I started out by painting all of my pieces, but waiting till the end to paint everything would probably be better.  I had to go back and paint a few things in the end anyway, like the ends that were cut.  I painted my piece a solid bluish color.  If I made another one in the future I may do a wiped off affect with the painting.  You paint the wood, then immediately wipe it off with a paper towel.  It gives it a nice affect.

I started out by making different sections of the chair, then glued the different sections together, and finished with the extra detail pieces.  The first piece I made was the back of the chair.  You will want to start by lining up 5 popsicle sticks all next to each other.  Then angle the popsicle sticks, so that the one in the middle is the tallest, then they gradually get lower.  Try to make both sides even. Once you have the backs to your liking, then take your pencil and draw a straight line across the bottom of the popsicle sticks.  My line was made so that just the very bottom of the middle popsicle stick was cut off.  Once you have your line you will want to cut each popsicle stick at that line.  Once these are all cut clue a full-length popsicle stick to the back of the 5 cut popsicle sticks to hold them all together.  This piece will stick out on both sides, so try to glue so that about the same amount sticks out on both sides.  This is what the arm rest will be.  I glued this piece at about the center of my 5 popsicle sticks.

The last piece is the front piece of the chair.  It is mostly just for looks, but really brings the chair together.  I took one popsicle stick and laid it across, then marked both sides.  I had mine cover the arms of the chair as well.  Once cut just glue it in place and touch up any paint spots, or if you waited to paint your chair, then do so now.

So, as I was cutting my last popsicle stick piece my boyfriend came home.  He came over to see what I was working on and said you know the Glowforge (laser printer) could probably cut that for you…  I had not thought about that.  The popsicle sticks are a bit difficult to cut and my cuts were definitely not even and straight.  So, for next time I would let my Glowforge do the cutting.  It would also help my chair to be a little straighter and the cut lines would be a lot straighter and even.  Only once did I have a popsicle stick split on my and I had to recut it, but it has happened to me more with the bigger popsicle sticks.  So, the Glowforge would also help with that.  To put the popsicle sticks in the Glowforge you would just need to tape them in place and the tape will also protect the pieces from burn marks from the machine.  I am not sure if a cricut machine could cut a popsicle stick, but it might just make a score line, like an exacto knife would be used for, which would make it easier to cut.

Over all I was extremely happy with how well this project came out.  It is very cute and looks very similar to the real thing.  The only thing I would do differently would be to be a little straighter and even with my cutting and gluing and use the Glowforge to cut my pieces.   You could also use the normal size popsicle sticks to make this chair a little bigger, so it could possibly hold a cell phone.