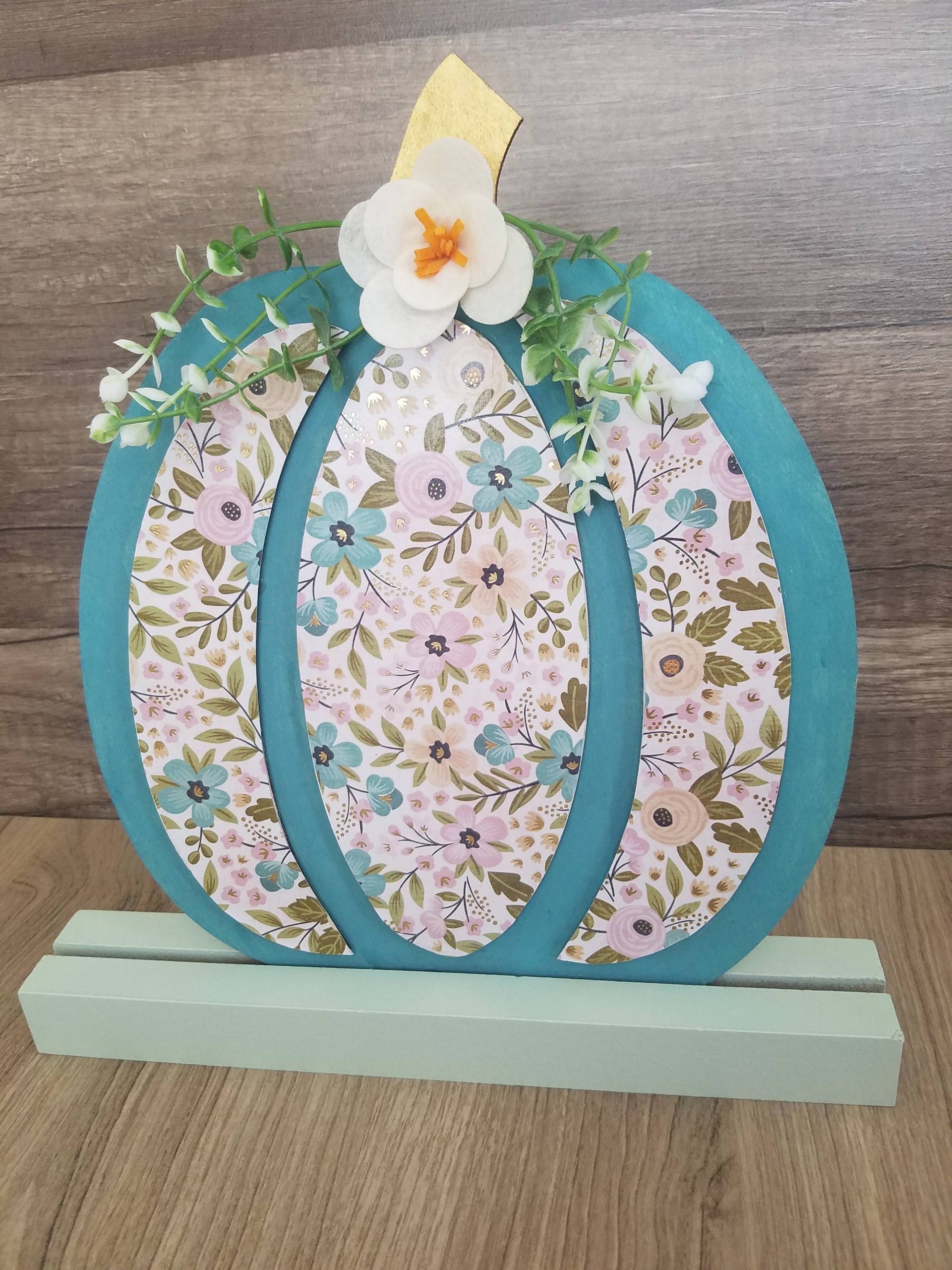 I started out by removing the bow and string used to hang this pumpkin.  Do not worry about the glue left behind from the bow, it will be covered up later on.  My flower also covers the hole, but you could use some wood filler to fill in this hole, and then paint over it.

Next, I measuring my cardstock.  I lightly traced with a pencil the shape of the 3 pieces that stick out on the pumpkin.  I then cut out each of the three pieces and laid them on the pumpkin to make sure they fit.  I originally did this with a scrap piece of white paper to insure they would all fit before marking or cutting on my nice cardstock. I was originally just going to lay my cardstock directly on top of my pumpkin and mod podge it down.  Then once it dried, I would cut or sand paper around the edges to get all the extra cardstock off.  However, my card stock was not quite big enough to do this.  So, I had to measure and roughly cut out each piece separately so that no cardstock was wasted.

Once the 3 cardstock pieces were cut out, I decided to paint around the edges of the e pieces of wood that stick out white.  This step may not be necessary, but I did this incase the cardstock did not completely cover a piece of the wood.  The white paint would then show instead of the raw wood, which would just look like the background of my cardstock.  Even though the cardstock looked like it covered nicely when I laid it over each piece, it could shift when I glue it down, or I might scratch a bit too much off when I sand paper the edges or cut the edges.

Next I painted the stem and flat portion of my pumpkin.  I mixed together some of my paints to make the darker blue color seen on my cardstock flowers.  I do not have any gray paint, so I even mixed my gray to darken my blue.  I really need to buy some gray.  I painted my stem a metallic gold color.  When painting the stem, I recommend not making a straight line at the bottom of the stem, instead blend it into the pumpkin.  It will make it look more natural.  This will probably not be seen with the flower and greenery, but it is good practice.   I then laid the cardstock inplace to make sure I liked it before moving on.

The last step is to arrange your decoration at the top of your pumpkin.  I like to lay things out first before I glue anything down.  Once I got the arrangement to my liking, I used gorilla glue to glue down my flower and greenery.  I used the glue bottle to hold the flower up in place as it dried.  Hot glue could also work, but I did not want to turn on my hot glue gun for this small piece.  I also did not want to add to the already mound of hot glue that was used to glue the raffia bow down originally.  I left these overnight to dry.

I absolutely loved how this turned out.  It was even better than I imagined.  It also looks even prettier in person. I really like that I added the flower and greenery instead of the typical bow and leaves that get added to most pumpkins.  I was then debating how to display this piece.  I did not want to hang it up.  I thought about just leaning it up against something, but was not quite sure about that either.  I was considering making a stand for it out of something I found at the Dollar Tree, but in the mean time I heard Target had their bullseye playground items 90% off.  So, I decided to see what they had.  That is when I came across these stands/bases.  They were perfect and even cheaper than getting something from Dollar Tree.  I tried out both color options, and went with the blueish one.  It just fits this pumpkin so well and really finishes it off.  I did have to had a few little pieces of folded paper to the back of the pumpkin to help it stand up straight in the base.  The slits in the base were just a little big.  I decided not to glue the pumpkin to the base just in case I decided to use the base for something else, like when my pumpkin is put away in storage waiting for fall to come around again.  I also thought taking the stand off when putting this piece into storage might be safer.  If you have decorated one of these pumpkins from Dollar Tree I would love to see how you decorated yours.  There are so many possibilities with these wood cutouts.

How To Make A Mini Fall Wagon