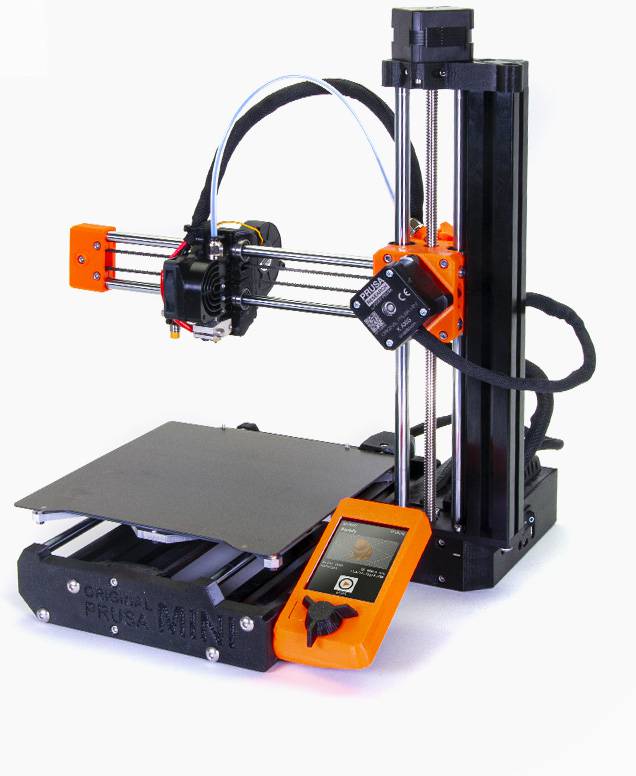 My boyfriend got the Prusa mini 3D printer for Christmas.  He is loving it, but still learning the ins and outs of 3D printing.  He uses the PLA filament he received with his 3D printer from Prusa.  It has a print volume of 18 cm (7”) cubed, and a removable spring steel sheets.  We were both very surprised how quiet this 3D printer was.  My boyfriend uses PrusaSlicer to prepare his prints. However, you will need to design/create a 3D file first to export it to .stl before importing it to PrusaSlicer. He uses Autodesk Fusion 360 to design his 3D models, but you can also use any other 3D modeling software such as Blender which is free and open sourced.

His model was purchased just before the mesh bed levelling sensor called SuperPINDA came out.  He is looking at replacing his MINDA sensor with the SuperPINDA. “SuperPINDA is temperature-independent, with higher quality sensor, and doesn’t need a thermistor. Making the first layer calibration and mesh bed leveling much easier and consistent.”  In other words it should result in a more consistent calibration of the first print layer.

A friend gifted him a sock for the head of his printer.  This is a piece that fits over the head of the printer to help protect it from bad prints.  “The silicone cover will keep your heater block clean and repel plastic of burnt, blackened and build-up, so that can extend the life of the heater block and extruder; and helps to keep the hotend temperature stable.”  So, this piece would be recommended, and can be found fairly cheap. Genuine E3D V6 Socks Pro (Pack of 3) (V6-SOCK-PRO-3PACK)

As of right now we are not planning on buying a cover for the 3D printer, but this is something we may do in the future.  The cover helps keep the temperature consistent while a piece is being printer.  We have only done smaller projects thus far, and have not had too much trouble with regulating the temperature.  Creality 3D Printer Enclosure, Printer Covers Constant Temperature Soundproof Dustproof Heating Tent for 3D Printing Room for Ender 3 / Ender 3 Pro/Ender 3S / Ender 3v2 / CR 20 (18.9″x23.6″x 28.4″) We have noticed dust collecting on the bed of the machine when it is not being used.  So, we may purchase a cover just to protect it from collecting dust. Aaaspark 3D Printer Protective Cover Waterproof Cover dust Cover Suitable for Most Assembled Desktop 3D Printers(17.7”x17.7”x18.8”,Black)

So, far my boyfriend has made a few sample/test pieces, some ear savers for a friend, and some cute flower hooks that he made for me.  We made my first flower hook with yellow PLA filament.  After the print was finished there was a good amount of strings/flyaway.  So, my boyfriend took a lighter to it and began to burn away the extra pieces.  This seemed to work fairly well.  When he was just about finished, he got a little to close with the lighter and it created a burn mark on the piece.  I was going to spray paint the piece anyway, so it was not a big deal.  The 3D printed piece took the spray paint very well.  I did not use a primer.  I just sprayed my desired color directly onto the piece.  It covered well, and did not seem to affect the 3D filament.  It does not scratch off easily either.  I did not spray it with any top coat.  For the second flower hook I wanted to use a glittery purple filament that came in a sample size with his machine.  Since this filament is so dark you would not see a burn mark very easily if you accidently got to close with the lighter, but we decided to play it safe.  So, for this piece we decided to try using a hairdryer to melt away the extra strings.  The hairdryer worked surprisingly well, and there was no chances of getting burnt marks on the piece.

To clean the bed of the 3D printer we use 91% isopropyl alcohol and lint free blue shop towels.  24PK Microfiber Towel

I found a tape dispenser in the clearance section of Hobby Lobby.  When I got home, I realized why it was only $1.  It was missing the piece that holds the tape.  My boyfriend said he could easily make this piece with his 3D printer.  I plan on using the 3D printer to make some future gifts for my boyfriend.  My boyfriend plans on making some boxes/cases for different projects he works on.  He likes to work on circuit boards and programing projects.  So, I think this machine will get a lot of use in our house hold.

I may add some of our 3D design we make to my free Library or my shop in the future.  So, if this is something you are interested in, then keep an eye out for these.

Learn How To Make A Wired Tree With Crystals

How To Make A Shadow Box Tree